Two of the Porsche 911 RSR will race over more than 1,000 miles at round six of the Sports Car World Endurance Championship WEC, with another two identical vehicle models tackling the twelve-hour IMSA WeatherTech SportsCar Championship race. The so-called #SuperSebring race weekend requires a massive effort from Porsche in terms of personnel and logistics – comparable to Porsche’s largest ever GT mission at Le Mans in 2018.

“The Sebring weekend is a massive undertaking for Porsche Motorsport. We have to transport our entire WEC crew including the cars and all the equipment over the Atlantic. That alone presents a logistical challenge,” says Fritz Enzinger, Vice President of Motorsport. “On top of this, our IMSA team competes at the same location on the same weekend. Two factory cars have to tackle each of these two important endurance races successfully. Everything has to be right.” The Sebring weekend also serves as preparation for this year’s 24 Hours of Le Mans, where Porsche will again field four works cars against five other manufacturers in the fiercely competitive GTE-Pro category.

“This will undoubtedly be one of the most intense race weekends of the year. The schedules of both series are so tight that we can only use few personnel on both sides. Basically, the two races add up to a marathon of over almost 24 hours. That’s definitely on a par with Le Mans, especially on this extremely demanding racetrack. We’ll have a 30-strong crew for each of the WEC and IMSA series, plus an additional 15 people for the GT3 and GT4 customer sport programme in the USA,” says Pascal Zurlinden, Director of GT Factory Motorsport. “The combination of both works teams is already working brilliantly. One example of this: While the IMSA team was testing in Sebring, the WEC squad used Core Autosport’s workshop to set up the two 911 RSR. They have everything that’s needed there. That’s how teamwork should be.”

“The cooperation between the two teams, the exchange of data and information, and not least the perfect organisation of spare parts are fundamentally important,” says Fritz Enzinger. “When we contested Le Mans in 2018 with four works cars we finished up with a double victory. So we know how it works. Now “across the pond” we aim to demonstrate the perfect synergy between the teams – in a race over twelve hours and another over 1,000 miles.” At the race weekend in Florida, dubbed #SuperSebring, a total of 17 drivers from Porsche’s 25-strong driver squad will share driving duties in the factory cars and customers’ 911 racers.

Comments before the races

Fritz Enzinger (Vice President Porsche Motorsport): “The race weekend in Sebring is very special for us. With the WEC and IMSA series being run as a joint event, the effort is huge. Like at the major Le Mans outing last year, optimal teamwork is essential. We’re not the only manufacturer to field factory cars in both series. The communication and exchange of information between teams will be key factors. The fact that we’re obviously good at this was clearly demonstrated by our success at Le Mans in 2018. I’m certain that we’ll also be in the fight for victory in Sebring.”

Pascal Zurlinden (Director GT Factory Motorsport): “Thanks to the excellent results from the first five races of the current season, we’re travelling to Florida as leaders of the manufacturer’s and drivers’ championships. We want to continue this great run. Our victory last year at the IMSA race in Sebring has clearly shown that the Porsche 911 RSR is very competitive on this special racetrack. We are eager to turn this into another win and expand our championship lead in the WEC.”

The Porsche works cars and drivers at Sebring

With 18 overall victories, Porsche is by far the most successful marque at the twelve-hour race in Florida. The sports car manufacturer dominated the storied event, which was contested for the first time in 1952, particularly in the 1970s and 1980s. Between 1976 and 1988, Porsche netted 13 outright victories in a row. Racing legends Hans Herrmann and Jo Siffert scored the first win for Porsche at Sebring in 1960. The most recent overall win was in 2008 thanks to Timo Bernhard (Germany), Romain Dumas (France) and Emmanuel Collard (France) at the wheel of a Penske Racing Porsche RS Spyder.

For its third racing season in North America, the Porsche 911 RSR was further optimised primarily in the setup. Depending on the size of the restrictor, the engine, which is positioned in front of the rear axle, puts out around 375 kW (510 hp). The large rear diffuser combined with a top-mounted rear wing provides aerodynamic efficiency and significant downforce. The 911 GT3 R was newly developed for the 2019 season. Improvements in the areas of aerodynamics and kinematics were systematically implemented from the insights garnered from the many race outings of its predecessor. The six-cylinder engine in the rear of the GT3 customer racer produces over 368 kW (500 hp). 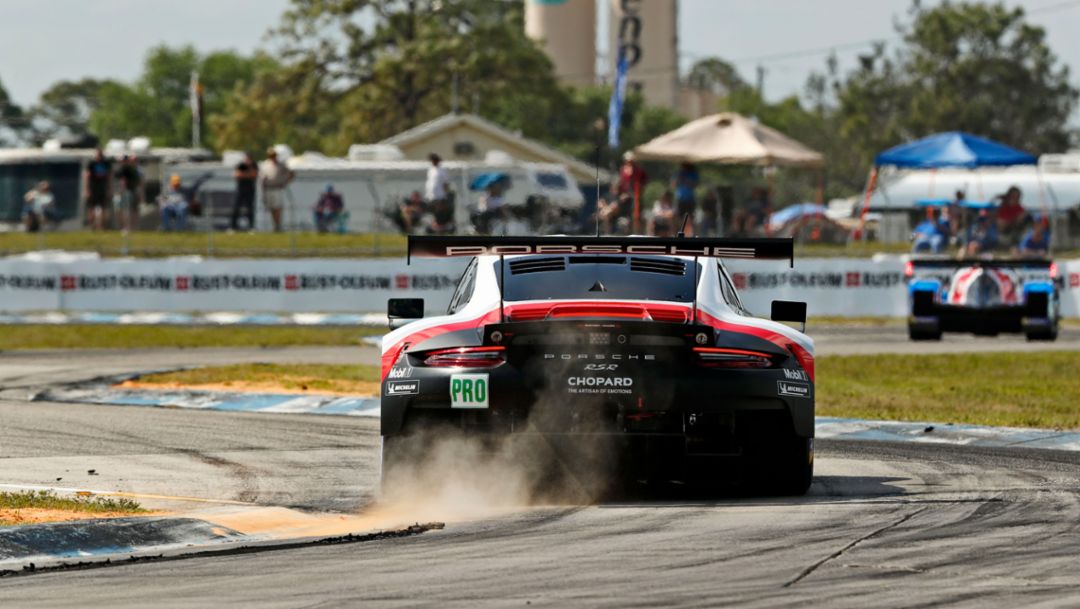 In the Sports Car World Endurance Championship (WEC), which was first contested in 2012, sports prototypes and GT vehicles compete in four classes: LMP1, LMP2, GTE-Pro and GTE-Am. They all compete together in one race but are classified separately. The Porsche GT Team contests the GTE-Pro class, while the customer teams Dempsey Proton Racing, Project 1 and Gulf Racing fight for honours in the GTE-Am class.

This is the IMSA SportsCar Championship

The IMSA SportsCar Championship is a sports car race series that has been contested in the USA and Canada since 2014. The series originated from the merger of the American Le Mans Series and the Grand-Am Series. Sports prototypes and sports cars start in four different classes: GTLM (GT Le Mans), GTD (GT Daytona), Dpi (Daytona Prototype international) and LMP2 (Le Mans Prototype 2). The Porsche 911 RSR runs in the GTLM class, and the Porsche 911 GT3 R contests the GTD class.

The sports cars will fly the colours of the successful Brumos team at the two longest races of the season. 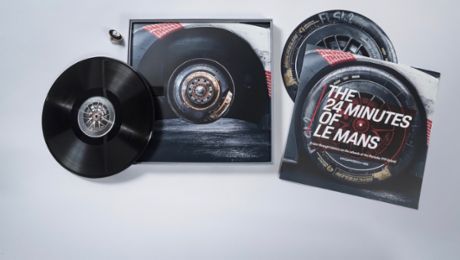 Porsche is setting another monument to the 919 Hybrid – with vinyl plates made from the tyres of the race car.