The name Porsche immediately evokes mental images of fast, perfectly constructed sports cars and famous racetracks around the globe. The name also calls to mind precision, functionality and performance, regardless of the time zone. Now, Porsche Design gives perfect shape to these ideas with the new 1919 Globetimer UTC, which embodies a technologically innovative and aesthetically perfect combination of motorsport and timekeeping across all (time) boundaries.

“If you analyze the function of an object, its form often becomes obvious,” was the credo of Professor Ferdinand Alexander Porsche. With the new 1919 Globetimer UTC, the engineers and designers at Porsche Design have once again met the high standards set by the company’s founder. This new world-time wristwatch from Porsche Design sparks enthusiasm with a winning combination of radically simplified functionality and optimized legibility of the displays. No matter where in the world your travels take you, the simple push of a button resets the twelve-hour hand to show local time. A day/night disc serves as an a.m./p.m. indicator, helping the wearer set the time for the correct half of the day in the new time zone. The date, linked to the local time, automatically shifts forward or backward when necessary. The minute and home time displays remain unaffected by the reset – Porsche performance for the wrist! 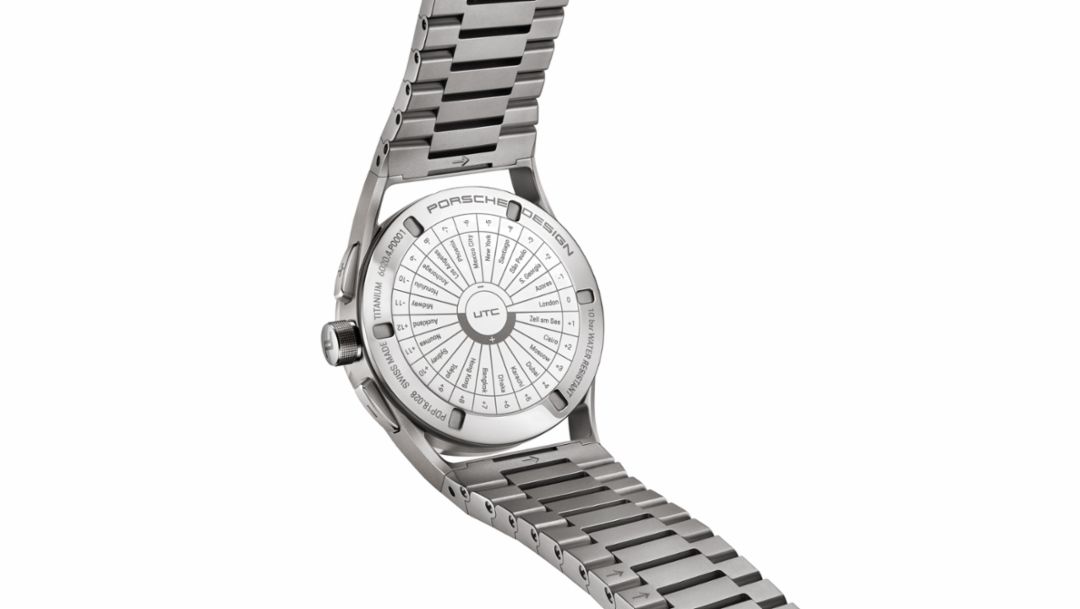 In 1972, Prof. F. A. Porsche began realizing his design ideas for a wide variety of everyday objects. A chronograph wristwatch was one of his first projects. He designed it in accordance with the same principles of perfect legibility, ergonomics and the instant recognition distinguishing the cockpit of the Porsche 911, which he designed. Admired ever since, Porsche Design epitomizes unadorned clarity skillfully uniting form and function, and symbolizing technically inspired products beyond the automotive world, simultaneously keeping the same standards of aesthetics and technological leadership. Porsche Design Timepieces enjoys special significance in this context. The perpetual urge for performance and precision, along with the unique transfer of technology from sports car construction to the watch industry, has always been and remains an obligation and motivation to be forward thinking, thus developing watches ahead of their time.

The famous compass watch, which combined two precise measuring instruments for orientation in time and space, is one example. The first chronograph made entirely of titanium, which debuted in 1980, is another. Prof. F. A. Porsche revolutionized traditional watchmaking through his use of titanium, a corrosion-free, lightweight and hypoallergenic metal Porsche had already used in the construction of engines for racing cars. The bold “Ocean” diver’s watch was also made of titanium, as were Porsche Design’s “travel watch” with world-time indication and alarm in 1995, its WorldTimer in 2007 and its Globetimer in 2015.

All of these wristwatches skillfully prove another statement by Porsche Design’s visionary founder: “I believe that one should not pack anything unless one knows exactly what’s inside it. One must consciously concern oneself with the function of the object and grow along with it.” This is precisely the situation with the new 1919 Globetimer UTC and its highly functional time-zone mechanism. This watch’s designers and engineers took a long, intensive look at exactly what globetrotters need in their daily lives, and united all the necessary features, creating an uncompromising, timeless synthesis. 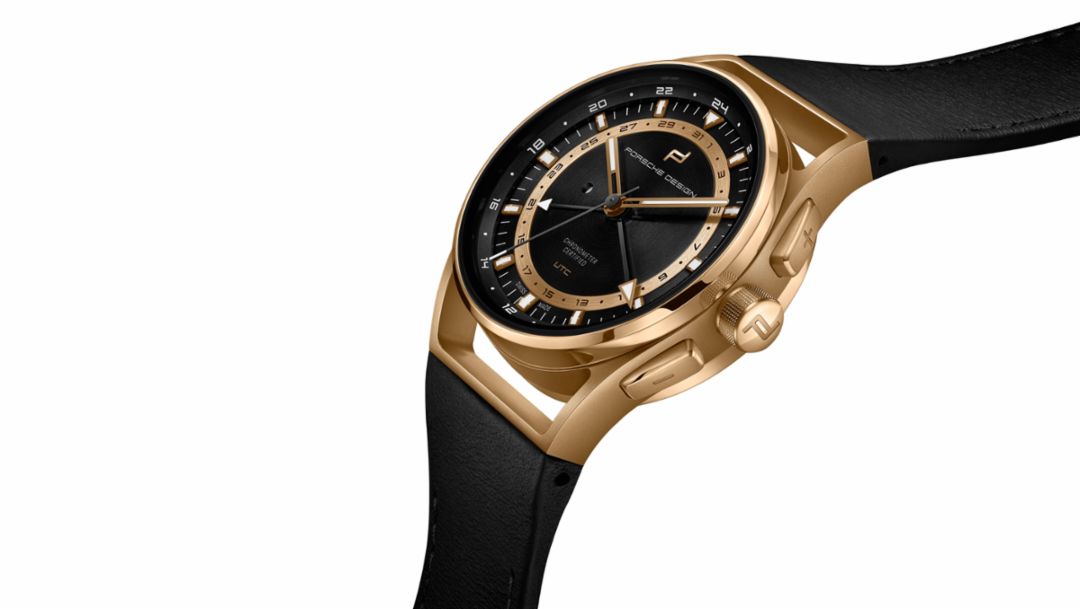 From practice for practice

Practicality is the top priority for long-distance travelers. Porsche Design’s 1919 Globetimer UTC makes it very easy for frequent travelers not to lose a moment of precious time. The local time can be conveniently set with the aid of the ergonomically shaped, optimally positioned pusher. Each press of this button causes the short, local-time hour hand to advance clockwise one position. When flying east, each press of the “+” button advances the second time zone by an interval of one hour. When flying west, pressing the “–” button causes the UTC hands to move in the opposite direction. All the while, the UTC hands automatically move, remaining in synchrony. To assure this occurs at midnight and not at noon, the time needs to be set correctly just once. A circular window on the left-hand side of the dial facilitates this task: a white dot appears here during the daytime hours, but the aperture remains black at night. Porsche Design has also taken into account the reference time, for which a second and clearly distinguishable hour hand with a distinctive luminous tip is responsible. This hand turns once every twenty-four hours, showing at a glance whether it is reasonable to phone home, or if it is already too late (or too early) to wake one’s family.

Nothing has been left to chance with the operation of the 1919 Globetimer UTC. The pushers, each with a precisely defined pressure point, dispatch the switching operations with speed and precision, designed and built with the chronographic competence amassed by Porsche since 1972. The well-conceived push-button control ensures intuitive operation, even while seated behind the wheel of a car. There is no need to unscrew the crown or sense its first detent position for independent adjustment of the local-time hour hand, thus eliminating a potential source of human error. This is another example of the great importance Porsche Design places on safe and secure operation. This also applies to the option of operating the watch under water: the waterproof case reliably withstands pressure up to ten bar.

Perfect legibility is another important feature. To intuitively display the time from any viewing angle, the dial’s radius has been made as large as possible, while the titanium case was designed to be uncommonly slim. Well-balanced styling imbues this watch with a unique lightness, further enhanced by the handsomely shaped wristband. Color contrasts, distinctive hands, indices and numerals combine with the generous use of nonradioactive Super-LumiNova luminous material to minimize the chance of misreading, even in conditions characterized by poor visibility. In addition, a sevenfold antireflective coating and an extra hard-coated treatment protect the sapphire crystal. 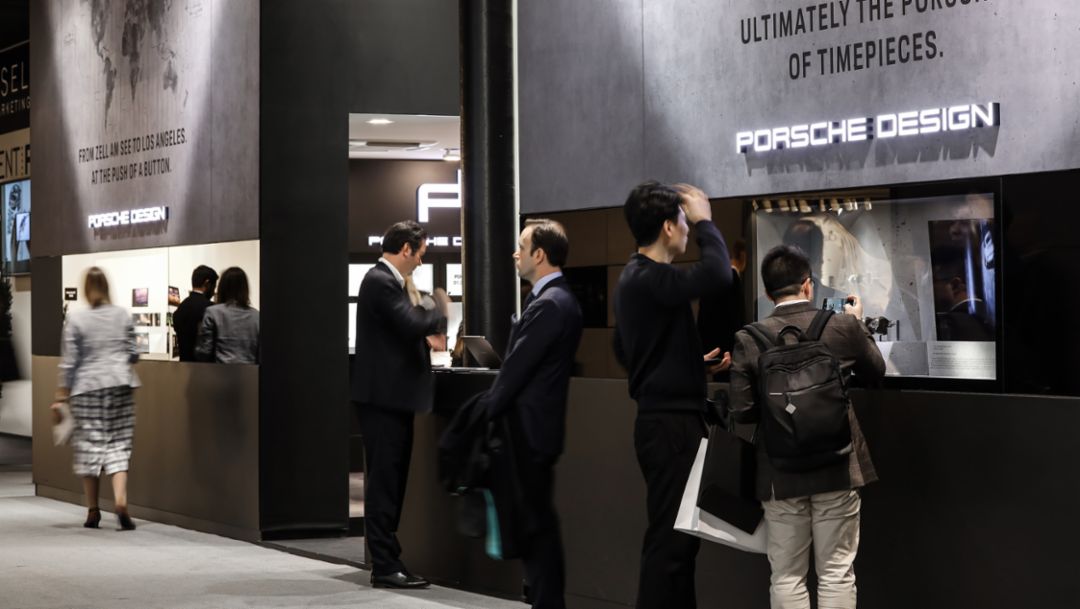 A caliber in its own right

“If we wanted something, we had to do it ourselves.” This statement by Prof. F. A. Porsche is still true today, as is unmistakably confirmed by the innovative automatic movement inside the tripartite 42-mm titanium case. Porsche Design’s new Caliber Werk 04.110, based on the Sellita Caliber SW 200, adds its own ball-borne, bidirectional winding rotor. The movement builds up a 38-hour power reserve with its balance paced at four hertz. The front of the caliber is equipped with a time-zone mechanism specially developed for Porsche Design. Such a time-zone mechanism, utilizing an ingenious push-button mechanism, was so far not available on the market. In 2014, the company accordingly decided to develop the necessary movement itself. The concept was followed by drafting precise technical specifications for an exclusive module, duly engineered by Porsche Design and manufactured by Dubois-Dépraz. Before starting serial production, the mechanisms underwent several long-term tests in compliance with the strict criteria of Chronofiable SA. The impact test’s candidates receive a blow equivalent to nearly 5,000 times their own weight, while each push-piece must withstand at least 10,000 switching cycles – far more than the watch will ever endure, even under extreme use. Before it is concealed in its case, each movement must also prove its timekeeping accuracy for fifteen consecutive days at the Official Swiss Chronometer Testing Institute (COSC). The caliber must not lose more than four, nor gain more than six seconds per day, throughout the fifteen-day ordeal. During this time, the movement undergoes testing in five different positions and at three different temperatures.

Porsche Design’s use of titanium for the 1919 Globetimer UTC is self-explanatory. Titanium’s excellent properties make it the ideal material for the equally expressive classic case, whose circular shape draws inspiration from the purist clarity and functional aesthetics of the Porsche 911. As Prof. F. A. Porsche says: “A formally harmonious product needs neither decoration, nor exaggeration. The form should draw its life from the bare minimum and must not distract from the product and its function.”

The 1919 Globetimer UTC is part of the exclusive 1919 watch collection and is available as of September 2019, in four model variants, starting at a price of 5,950 Euros (RRP) in Porsche Design Stores, at select specialty retailers, and online at www.porsche-design.com.

While taking his 1979 911 SC out for a spin, Kavka talks about his special relationship with Porsche.

There are many different reasons why people buy a Porsche. But for Marc “Turbo” Grüne, his reason is crystal clear. 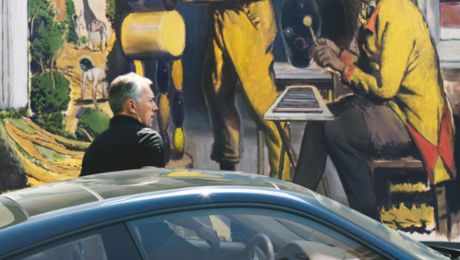 Neo Rauch is one of the most prominent artists of our time—and an avowed Porsche fan.