The comprehensive expansion project was launched this Tuesday in the presence of the Minister President of Saxony, Michael Kretschmer, the Lord Mayor of Leipzig, Burkhard Jung, Albrecht Reimold, Member of the Executive Board for Production and Logistics at Porsche AG, and Gerd Rupp, Chairman of the Executive Board at Porsche Leipzig GmbH. As part of the celebrations, the foundation stone was laid for a new body shop with a total area of 75,500 square metres. The vehicle bodies for the next generation of the Macan–which will be a fully electric series–will be manufactured here from the beginning of the next decade.

“Porsche decided to establish a site in Leipzig in 1999”, said Albrecht Reimold, the board member responsible for production. “Since the initial ground-breaking ceremony in February 2000, we have invested more than 1.3 billion euro to develop the plant. We’ve never regretted the decision we made in 1999 to set up a factory in Leipzig. And this is why we are preparing the factory ready for the future. We are considerably enhancing our site in Saxony and making sure that it is in the best possible position to handle future mobility concepts and customer expectations.”

“The decision to manufacture the next generation of the Macan in Leipzig is a vote of confidence in the employees who work at the site”, said Gerd Rupp, Chairman of the Executive Board at Porsche Leipzig GmbH. “The factory expansion also allows Porsche to actively shape the development of electromobility in the state of Saxony. Porsche will therefore remain a forward-thinking driver of economic growth in the region.” 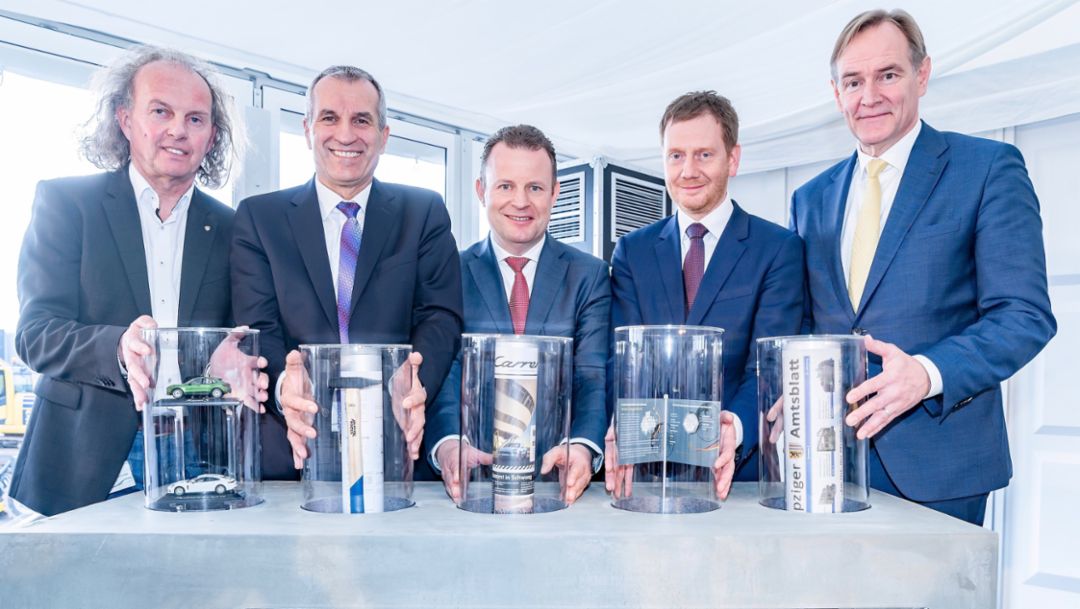 Minister President Michael Kretschmer said: “Porsche will continue to design the mobility concepts of the future in Saxony. I am delighted about this far-reaching decision from Porsche, which also recognises the value of the staff and the site in Leipzig. The company decided to build its second home in Leipzig around 20 years ago. Thanks to today’s events, this success story is set to continue. This expansion project is a strong vote of confidence in the future strength of the state of Saxony.”

“The decision by Porsche to locate its factory here in north-west Leipzig has been a stroke of luck for our city”, said Lord Mayor Burkhard Jung as the foundation stone was being laid. “Numerous other companies have followed in Porsche’s footsteps and these forward-looking investments are bringing innovation, stability and secure jobs.”

The expansion project gives Porsche the option to produce fully electric vehicles on the existing production line in addition to petrol and hybrid models in the future. The first car to benefit from extended factory premises will be the next generation of the Macan: As a purely electrically powered vehicle based on the “Premium Platform Electric” (PPE) architecture, the new Macan will roll off the assembly line in Leipzig at the beginning of the next decade.

Porsche Leipzig GmbH can look back on a successful history: The factory was opened in 2002 and started with series production of the Cayenne SUV with 259 employees. Since then, the site has continuously developed into one of the most state-of-the-art and sustainable production plants within the automotive industry. Back in 2011, the Macan model was the inspiration for an overhaul that set in motion a true success story: The factory in Leipzig was expanded to include a dedicated body shop and paint shop to accommodate production of the Macan. The last two years have also seen end-to-end production of the Panamera series in Leipzig. Porsche Leipzig GmbH now employs a workforce of approximately 4,300 employees, and the factory manufactures the Porsche Panamera and Macan series, as well as bodies for Bentley.

The first all-electric compact SUV from Porsche is due to roll off the assembly line at the start of the next decade.

First customer vehicle of the new version of the Porsche Macan rolls off the production line.

Porsche is investing in the further expansion of the Leipzig site as the Macan will be produced in Leipzig.