Piloting their ca. 510-hp race car with starting number 91, Richard Lietz (Austria) and Gianmaria Bruni (Italy) will take up round six of this year’s Sports Car World Endurance Championship (WEC) from eighth on the grid. In the GT-Am category, customer teams Dempsey Proton Racing (#77) and Project 1 (#56) locked out the first grid row.

The Porsche GT Team kept both factory cars in the pit lane during the opening phase of the qualifying in an attempt to avoid heavy traffic during the hunt for top times. Christensen made the best use of the situation with a fast lap time; his teammate Estre turned a perfect lap utilising all the grip of his fresh tyres. The combined time of 1:57.500 minutes put the duo at the top of the time sheet and earned them an additional championship point. Bruni at times encountered heavy traffic during his qualifying attempt. Porsche Young Professional Matt Campbell was the fastest in the GT-Am class. The Australian, who won the Bathurst 12-hour race in Australia at the beginning of February, will take up the race over 1,000 miles (or eight hours) from the first grid spot with his teammates Christian Ried (Germany) and Porsche Junior Julien Andlauer (France).

Pascal Zurlinden (Director GT Factory Motorsport): “It’s simply perfect when you score pole position with the world-championship-leading car and earn an additional point for it. That’s how we imagined our Sebring performance. It’s also a great pleasure to see how well our customer teams have positioned themselves for the long race, with first, second and fifth on the grid. A huge compliment to the Project 1 squad. They had to build up a completely new car after an incident in the test prior to the race weekend.”

Richard Lietz (Porsche 911 RSR #91): “We managed to find an excellent balance for the car. Our changes to the suspension setup were perfect. The car ran very well in qualifying. As opposed to our competitors, we didn’t use the second set of fresh tyres. We hope that this strategy will pay off for us in the race and that we can make the most of this advantage.”

Gianmaria Bruni (Porsche 911 RSR #91): “We’re probably the only team who opted out of using another set of fresh tyres. That was the right decision, because early on in my qualifying stint the track was so dirty that the first lap was only good for cleaning up the rubber. In the second lap I caught up to an Aston Martin. Otherwise I would have definitely done better than position eight.” 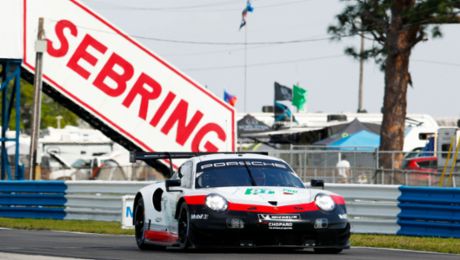 Both Porsche 911 RSR fielded by the GT Team finished on the podium at the WEC in Shanghai.

The sports cars will fly the colours of the successful Brumos team at the two longest races of the season.