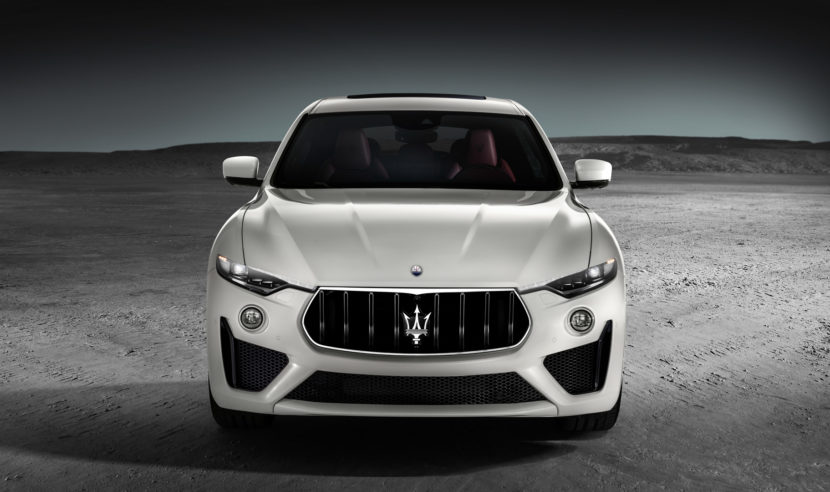 So last week, I wrote a story about my day with Alfa Romeo and Maserati in Michigan, where I was treated to good food, some great cars and some crappy weather. The Italian flare of the event was enough to make up for the latter, though. When we last spoke of this, I had left off at Alfa Romeo, as much of the Maserati information was under embargo but I didn’t want to chop it up for you, so I figured I’d wait until the day it was all okay to talk about. That day is today and the big story, the one that was under embargo, is the brand-new Maserati Levante GTS.

Maserati officially revealed the Levante GTS today and it will be making its worldwide debut at the Goodwood festival of speed. However, it made a much quieter debut just a couple of weeks ago with yours truly in attendance. Not only did all of us journos at the event get to see the Levante GTS in person but a lucky few of us had the chance to drive it. Thanks to some diligent and patient waiting, along with an incredibly helpful team at Maserati, I was able to get some seat time in Maserati’s newest beast of an SUV minutes before I had to leave for the airport. But before we get into the new Levante, let’s talk a bit about my day with Maserati first, as the Levante was just the finale. 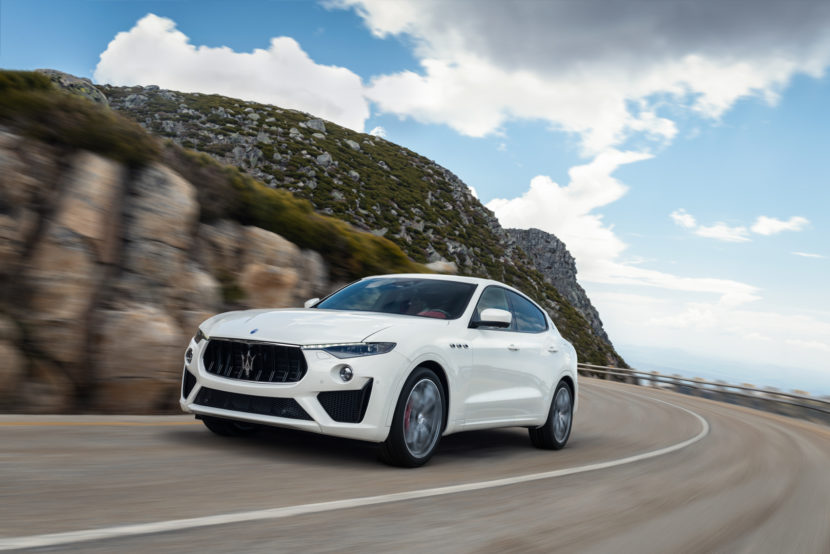 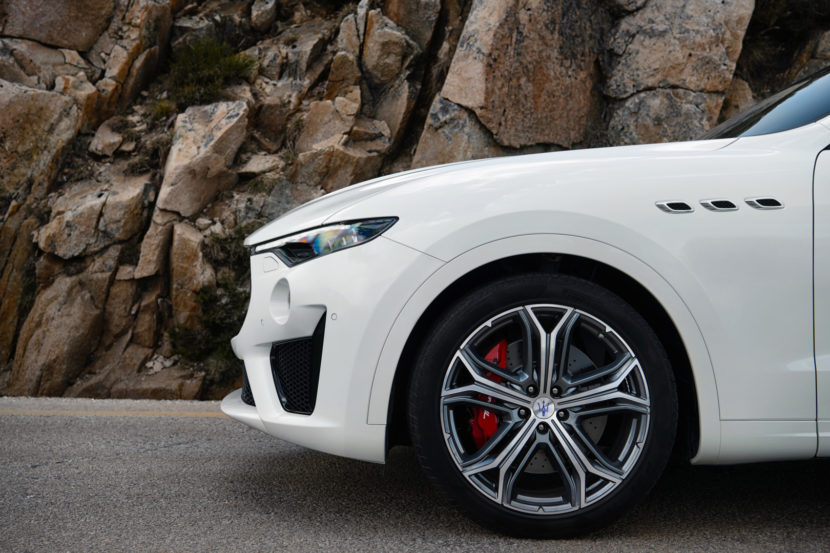 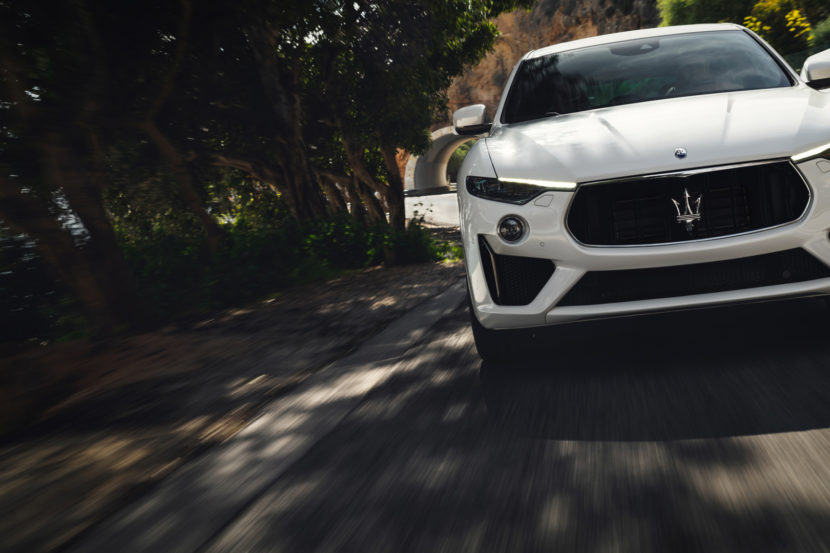 Prior to that day, I’d never driven a Maserati before. I’d driven a first-gen Ferrari California, which sported the same 4.7 liter naturally-aspirated V8 as a Maserati Gran Turismo, but that’s the closest I’d ever gotten. So I was excited to get behind the wheel of a car from a brand that I’ve admired for almost my entire life, a brand whose racing history and pedigree is almost unparalleled.

The first car I got in all day was a Maserati Ghibli S. For those of you not in the know, the Ghibli is about BMW 5 Series size, with similar levels of luxury and tech. However, the Ghibli S is more expensive than every other 5 Series without an M badge and it packs a 3.0 liter twin-turbocharged, Ferrari-derived V6 engine with 430 hp. I rode shotgun first, as another journalist took the driver’s seat. That allowed me to check out the interior quality and infotainment system a bit, as we drove along some Michigan roads quite slowly, due to the lashing rain.

I have to say, I was a bit disappointed. Not with the quality of the materials, as they were mostly lovely (especially the almost unbelievably soft headliner. It’s like you’re touching baby bunny fur), but I was disappointed with some of the touch points. I understand that Maserati is a low-volume automaker and that it needs to borrow FCA parts to make its cars within budget. But seeing the same window switches, wiper stalk and buttons as my wife’s 2014 Jeep Grand Cherokee turned me off. This was a Maserati, a car from one of the most exclusive, prestigious names in all of automotive history. I don’t want to see Jeep parts. Hell, some of the switches you can find in a Chrysler 200 rental. 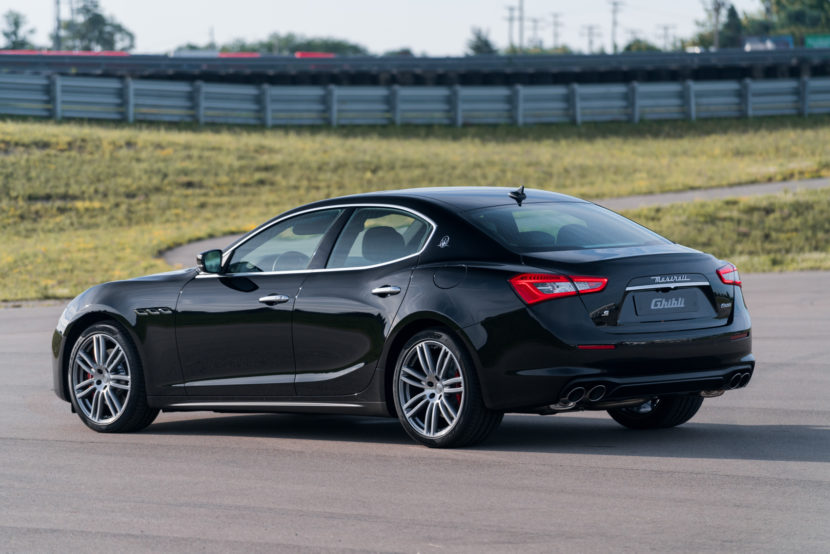 Having said that, driving it made things better. Once behind the wheel, I realized Maserati did do some things really well with the Ghibli. The seating position is excellent, as is the pedal placement. I also like the steering wheel, even if it was a bit boring for a Maserati. But that engine, what a lovely engine. Gobs of torque, great noise and effortless forward thrust. And much like Alfa Romeo, it had lovely metal paddle shifters that just beg to be worked. So the Ghibli S was good fun on the move but when you slow down it starts to remind you of its FCA roots. Which is disappointing.

Unfortunately, my next Maserati experience wasn’t much better. Following that drive in the Ghibli, I drove an Alfa Romeo Giulia Quadrifoglio, one of my absolute favorite new cars on the planet, as mentioned in the previous article. So I was coming off a bit of a high, from just how excellent the Giulia was on track. Following that, I jumped in a Maserati Quattroporte on the same track. While I’d never driven the previous-gen Quattroporte, I was always in love with it. It’s style, its charm and its free-breathing Ferrari V8. So I had high hopes for this new one. Unfortunately, I was let down.

On track, it’s just far, far too soft of a car. The steering was woolly, the brakes were mushy and even the eight-speed ZF gearbox, which is usually flawless, seemed slow and dimwitted. The engine, which is the same 3.0 liter twin-turbo V6 as the Ghibli, was excellent and made a lovely muted growl, but the rest of the car seriously disappointed. Now, admittedly, I didn’t get to drive the Quattroporte on the road, which is where I think it would be perfectly at home. It is a luxury car after all and I think it probably makes a good one. However, a Maserati, luxury car or not, is supposed to be able to thrill and it just didn’t. Prior to driving, I had sat through a demonstration on the history of the brand and how its main goal was to make driver’s cars, regardless of vehicle segment. Yet, the Quattroporte seemed to spit in the face of that claim. 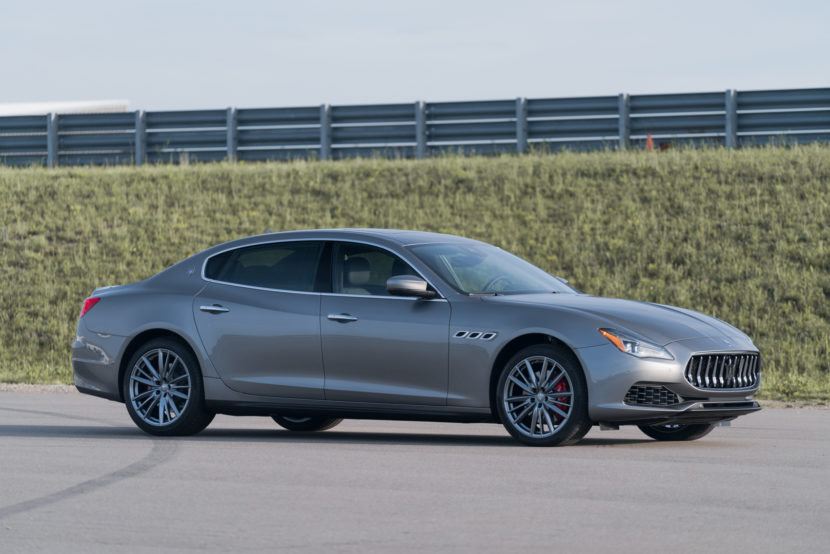 So after having driven the Quattroporte, I really wasn’t too thrilled about the brand itself and was extremely skeptical about what its SUV would feel like. Still, I wasn’t going to let an extremely exclusive test drive slip through my fingers. So I waited and waited and waited some more for a chance to get in the Maserati Levante GTS. Maserati only had three on hand, all of which were only doing a few laps and then had to wait for other Maseratis and then other Alfas to go ’round the track before getting back on. So it was a process and it took awhile and my clock was ticking, as I had to catch a ride to the airport at 2:30 PM and it was already just after 2:00 PM.

Thankfully, the kind folks at Maserati worked some magic and another journalist who was staying later kindly switched time slots with me. So I was able to get into the all-new GTS, a car no one had even seen yet, never mind driven.

So what is the Maserati Levante GTS? It’s the brand’s latest high-performance SUV, designed to take on cars like the BMW X6 M, Porsche Cayenne Turbo and Mercedes-AMG GLE63. It’s not the top-of-the-line Maserati SUV, mind you, as that’s the 590 hp Levante Trofeo. The Levante GTS is a bit less insane but a bit more attractive because of it. 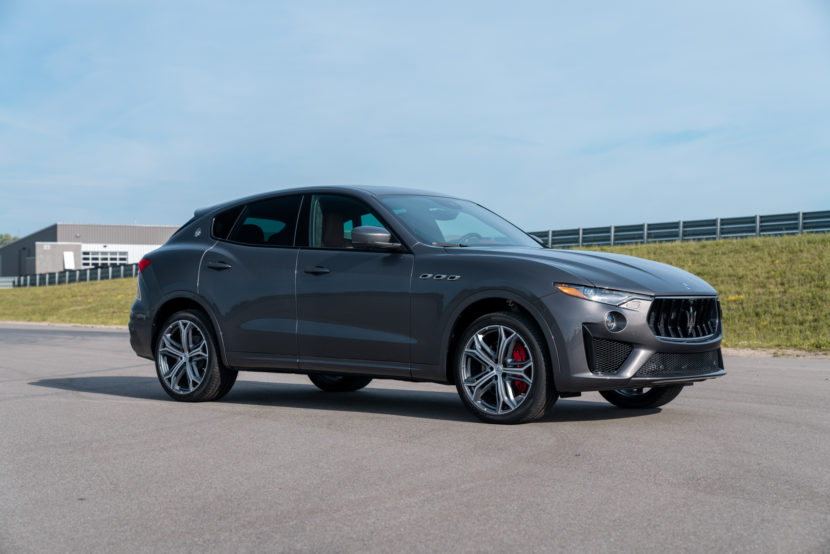 Under its hood lies a 3.8 liter, twin-turbocharged Ferrari V8 that makes 550 hp and 538 lb-ft of torque. That engine is paired with an eight-speed auto and all-wheel drive. It also has close to a 50:50 weight balance, front to back, which is really impressive for an SUV. According to Maserati, 0-60 mph happens in 4.0 seconds flat but we wouldn’t be surprised if it’s actually a bit quicker than that. It’s really damn fast.

So we head out onto the track and the Levante GTS immediately felt better than the Quattroporte by a mile. It blew me away, actually, because I was enjoying chucking it around far more than any other Maserati I drove that day. It was really confusing to me because the Quattroporte felt sloppy and soft while GTS felt nimble and light on its feet. That engine is superb as well, with explosive power and a great noise. I was really enjoying the Levante GTS quite a bit. And then the rain came.

While it was misting at the beginning of my laps with it, half way through the second or third lap, it seemed as if the skies open up and a waterfall simply fell on the track right as we were doing about 120 mph and approaching our braking zone. So things got a bit nerve-wracking from there. The rest of the laps, we couldn’t see a foot in front of the car, never mind apexes and braking points. So it was a really butt-clenching game of trying to go fast enough so as to not get rear-ended by the car behind me but not too fast so that I can’t react to the track ahead of me. All in a very exclusive, six-figure Maserati. That part wasn’t enjoyable. 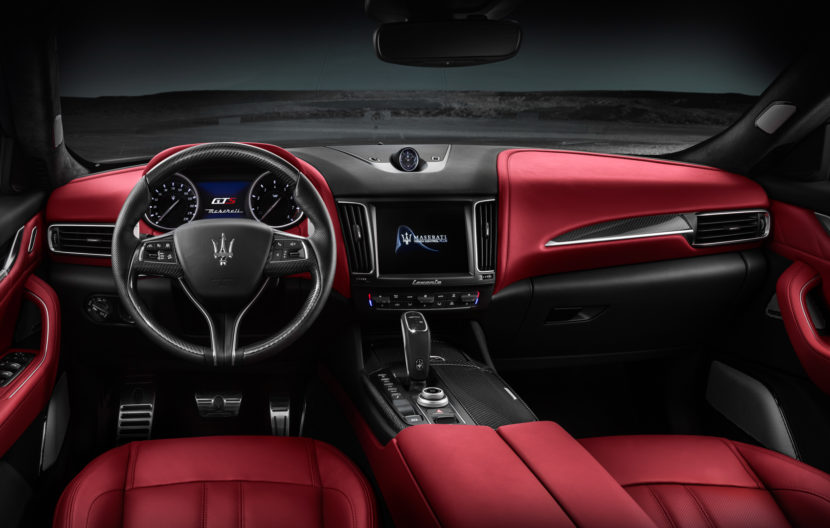 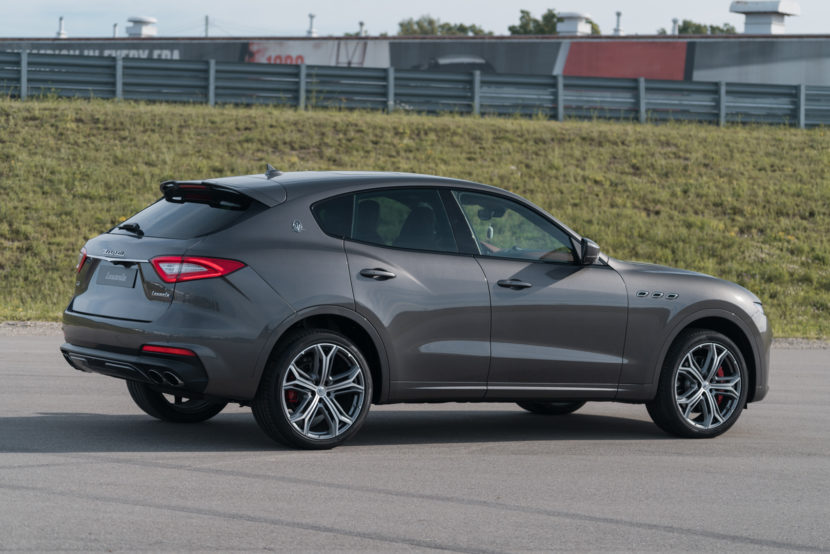 Still, once it was over, I was feeling optimistic about the brand again. After having heard Tim Kuniskis, the global head of Alfa and Maserati, talk about the direction of the brand and then having felt the Maserati Levante GTS, it’s easy to see that the once-revered Italian brand is on the rise. It’s really an impressive SUV, the new Levante GTS, and one that will give the BMW X6 M a real fright. While the BMW will still sport better interior tech and probably better build quality, as the GTS still had some FCA bits in it, the performance and driving dynamics of the Maser will have the X5 M very worried.

After that hectic drive, it was off to the airport to fly home. Which was of course met with more delays and more waiting around. But I was happy that I had finally experienced Maserati, a brand I had always dreamed about. While my experience was a mixed bag, it was still a worthwhile one, one I’m thankful for having had, and one that left me optimistic about Maserati.