Toyota news isn’t typically on the radar of BMW fans. Not that there’s anything wrong with Toyota but it’s not really an enthusiasts brand, per say. However, there is one Toyota that almost every car enthusiast can at least respect and appreciate and it’s also one that’s forever linked to the Bavarian brand — the Toyota Supra.

By know, you probably know that the upcoming Toyota Supra and new BMW Z4 are based on the same chassis. Not only that, but they share the same engine, gearbox, differential and interior technology. That’s because both cars were co-developed by BMW and Toyota as part of a joint sports car project. So while Toyota news isn’t big news for BMW fans, the news of the Supra should be.

Which is why it’s exciting to see what the new Toyota Supra looks like in some of these new leaked photos.

The Supra is said to be debuting this year, officially. Though it seems as if someone decided to jump the gun and release some photos of the new Supra ahead of time. Someone has recently posted two of these photos on SupraMKV forums.

It looks good, this new Toyota Supra. It looks very different from every other Supra but is still evidently one of the family. It looks smallish, sporty and very athletic. But more importantly, it doesn’t looks like the BMW Z4. Sure, if you squint, you can sort of see the same proportions as the new Z4 but that’s not really abnormal, considering both have always been rear-wheel drive sports cars with short rear decks and long hoods. I especially like the back end of it, with its large rear wing built into the decklid. It also seems to have suspiciously BMW-looking side mirrors. 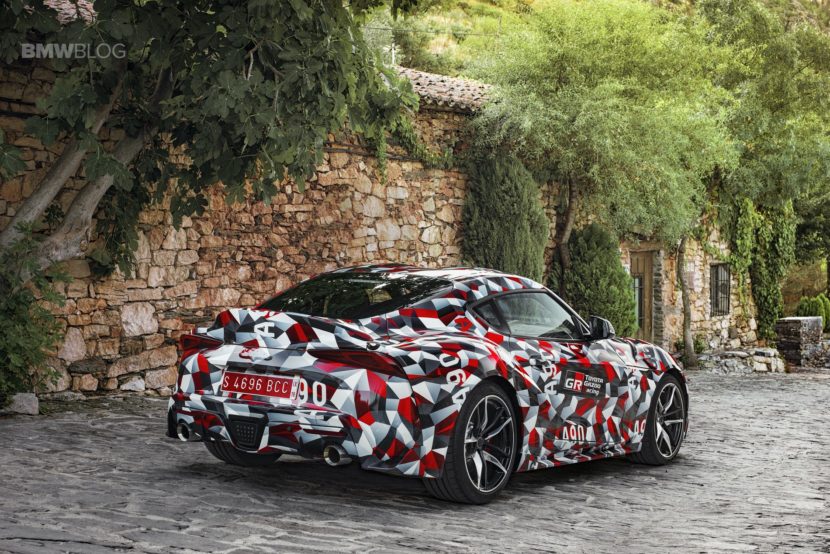 Under the hood will lie either a 2.0 liter turbocharged four-cylinder engine or a BMW-sourced 3.0 liter turbocharged I6. The latter of which is very exciting, even to Supra enthusiasts, because it not only gives the car a great engine but allows it to keep the Supra’s classic layout — s straight six.

We’re very excited to drive the new Toyota Supra, especially back-to-back with a Z4, to see what the differences and similarities are.